A look at Lawson's Road Wetland

Not too many years ago the BEAT Naturewatch group secured the funding to transform a redundant badly drained former sports field into a fantastic wetland area full of potential.
Two FARG members undertook a two hour torch survey of four of the ponds last night that wasn't quite as productive as hoped.
A single Frog was found in the first pond which was notably lifeless.However we could hear frogs calling in theother ponds without actually seeing them. We knew they had been there due to the huge amounts of spawn in each. One clump had suffered a little frost damage showing white rather than black eggs in the spawn sitting above water level.
The last pond looked at had a healthy population of Smooth Newts with 12+ counted and one female wrangled - gently - just to check that it definitely wasn't a Palmate Newt, very unlikely but you never know. The speckly chin gives the game away as a Smooth Newt. 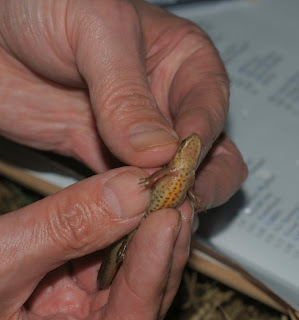 This small Toad was the only one seen. 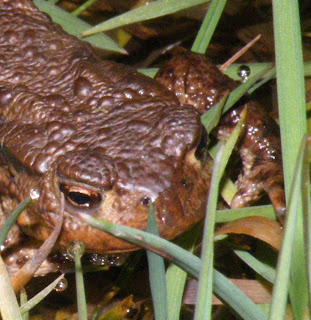