This afternoon members of FARG ﻿went checking out a site where we found a single Great Crested Newt last year. The aim was to confirm that they aee still present this year after the hard winter.
The site is a series of fairly recently dug ponds whose vegetation still hasn't stabilised and the dominant species tends to vary from year to year.
This year Water Crowfoot is super-abundant but other plants that GCNs seem to prefer to lay their eggs on are notably few and far between.
After searching two of the ponds without success the third pond gave us a folded leaf. that is almost definitely the work of a female Great Crested Newt. 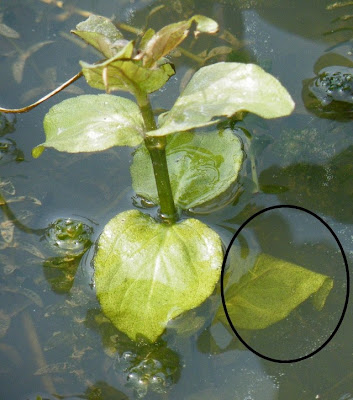 Before long we found several more. Note how the fold is not at 90deg across the leaf but at an angle which is often a real pointer towards the activity of Great Crested Newt. 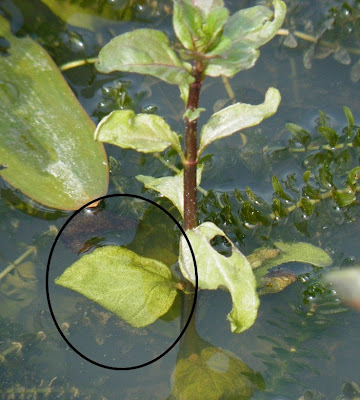 One leaf was just within reach and we took advantage of the fact to pick the leaf and check the fold, to make sure that it wasn't a natural curl to the leaf. We are not sure if  two eggs were found within, one still containing a growing embryo, or if the embryo has already eaten its way out of the egg abbove it. 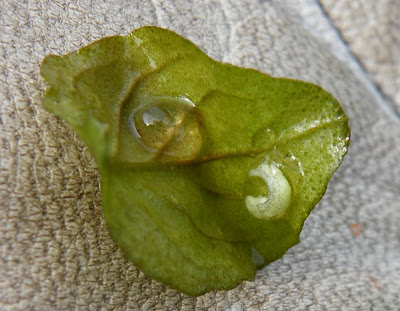 The leaf was gently replaced near where we took it from hidden under some other vegetation, hopefully the embryo will continue to develop and become an eft in the next day or so.
Good to see that they are still present and doing well at this site.
Later in the week we hope to be taking a look at some more ponds on the North Blackpool Pond Trail.

If you have a pond with newts, of any species in it, or frogs or toads please let us know..
Also let us know if you have seen any reptiles anywhere in the Fylde, unless they are Common Lizards along the coast - for which we have plenty of records.
For either amphibians or reptiles use the email address in the sidebar - Thank you
Posted by Fylde Amphibian & Reptile Group at 11:08